With social come secrets, always. And this week the digital world is no different, Facebook whisper their hopes for bots and money making, we take a closer look at Magic Leap, Google’s 360-degree camera gives us a glimpse of the future of entertainment, Coachella jumps on VR, and Elon Musk has some secrets up his sleeve.

Believe it or not Friday is finally here, so congratulate yourself on making it, crack open a cold one and dive into this week’s edition of The Weekly Wins.

According to an article in Digiday, “Facebook is betting big on bots.” These bots will, apparently, allow developers to communicate with people using a mix of artificial intelligence and human oversight to mimic conversations (slightly unnerving). Mark Zuckerberg spoke at F8 where he irked at the number of apps that clutter his phone. He praised apps like CNNs where people get summaries of the news. In short they’ll be testing a new conversational commerce experience to get us to spend more. (My purse is silently weeping.) 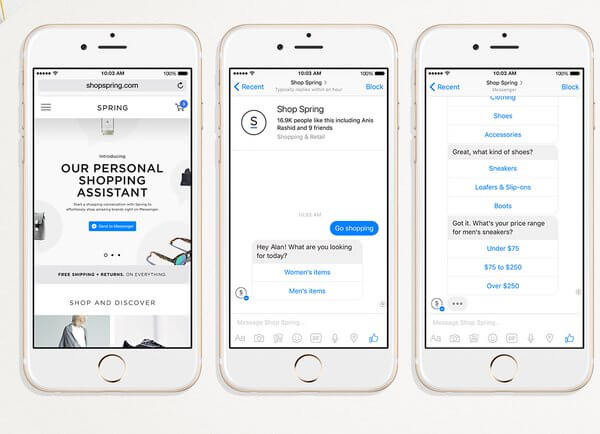 You’ll spend way more money than you want on this"

2. Magic Leap and their winning hand

Wired have published a fascinating article on the startup that’s kept its cards close to its chest, and to make it even more mysterious they’re not even situated in Silicon Valley, I know right! Magic Leap is the leaders of MR (Mixed Reality). They have created goggles that are semitransparent, allowing you to see your actual surroundings while adding to it. People are excited by this technology, so excited in fact that Magic Leap have received ‘the largest C-round of financing in history: $793.5 million.’ I’d seriously suggest giving this article a read.

“Travel experiences - terror at the edge of an erupting volcano, wonder at a walking tour of the pyramids – will be accessible to anyone with a VR rig.”

3. The future of movies

Google’s 360-degree monster short is apparently the future of movies. And, it looks pretty epic. The same director as Star Trek Beyond, Justin Lin, created a nearly five-minute film that puts users on the streets of Los Angeles as the alien creature crash lands. It’s a fun glimpse into the future of entertainment. But don’t take my word for it, check it out for yourself!

YouTube are championing and easing the anxiety-induced emotions that come with FOMO. They have live-streamed 360-degree video of the Coachella music festival for those of us who couldn’t be there. It’s a smart way to share their new ability to live-stream 360-degree video. YouTube’s chief product officer Neal Mohan says, “After years of live-streaming Coachella for fans around the world who can’t attend the festival, this year we’re bringing you the concert like never before by live streaming the festival in 360 degrees with select artist performances.” The video will work with Google Cardboard only. If you are suffering from FOMO check out the channel, although I’m not quite sure it’ll be the same.

5. Elon Musk is being Elon Musk

Rumor has it the electric car genius, Elon Musk, has taken it upon himself to solve the traffic crisis in our cities. According to a TechCrunch article, Elon has a secret plan divulged by a Bloomberg report that suggests his imagination briefly overflowed, “we have an idea for something which is not exactly a bus but would solve the density problem for inner city situations.” I’m going to guess he’s not talking about a tram, but feel free to speculate.

A memory of Prince