IHOB, The Olive Tree and more!

The Weekly Wins are back! The digital world never sleeps and this week was no exception. Here are some selects from the items that caught our attention:

All news is good news when you’re a brand looking to garner some attention.

If there’s one thing that consumers love to heap their pent up rage upon, it’s when a beloved brand attempts a facelift. This has proven to be true many times in the past, with Pizza Hut’s short and unsuccessful attempt to become a little more cool with an abbreviation to “The Hut”, being a great example.

IHOP may not be a brand that most Canadians are intimately familiar with. North of the border it’s presence is scarce and mostly relegated to border towns hoping to tap into some brand recognition/loyalty from American tourists and travellers.

So for those of you who don’t already know it, IHOP stands for “International House of Pancakes.” Apparently no longer as IHOP announced via Twitter that it will be henceforth known as “IHOB” as it branches out of the pancake game and in to the world of burgers.

As expected, the Twitter-verse erupted, and near universal scorn was unleashed on the brand for trying to hard, or for trying at all, as IHOP fans were happy enough with the status quo.

At this stage it’s unclear whether or not the name change will remain but it is clear that IHOP/IHOB scored a lot of attention from cleverly exploiting the internet firestorm that they expected to happen when they changed their name.
It is clear that IHOP now sells burgers, however. Bravo IHOB, bravo.

2. Bot Or Not Featuring Olive Garden

A man has finally answered a question that most people have considered at some point in their lives: what would an Olive Garden menu look like if it were written by an AI? Really, it’s surprising that more of us didn’t think to force feed a bot over 1000 hours of Olive Garden commercials to see the script that the bot would produce as a result.

The product of this experiment is perhaps the exact sort of weirdness that you would expect, by turns terrifying and hilarious. The lively exchange in the bot-created commercial leads to the waitress proclaiming such desirable items as “unlimited stick,” “extra Italy” and “Gluten Classico”.

It should be noted that this story was originally tweeted by a comedian named Keaton Patti and that a subsequent tweet pointed out that it is unlikely that Patti actually accomplished feed a bot that much Olive Garden content. So the likelihood is that Patti wrote the script himself.

The only thing that changes really is that that instead of being amazed by the slightly-off-the-mark tone of a bot writer, we can again be amazed by the creativity and imagination of a human.

Admittedly, it’s not as much fun. 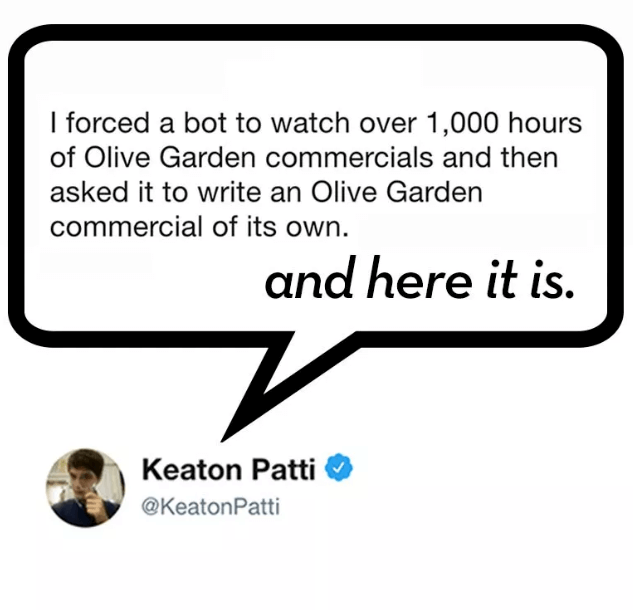 Script of the year?

3. In Search of News Truths

The fallout from Facebook’s rough year continues. It appears that an increasing number of people are dropping off of the platform, citing a growing lack of trust in Facebook.

Specifically, a majority of people are now aware of the Facebook news cipher and how easy it is for outside forces to manipulate it. Bad press surrounding the 2016 American election has been the main driver in this.

Apparently an increasing amount of people are opting to use personal messaging services as a source for their news.

It is conceivable that this could decrease the potential for manipulation from outside actors in the news cycle but it does nothing to decrease the information echo chamber that is created when a person seeks out a forum of people with the same political bent.

Of course, the amazing thing about the internet as that one has the ability to curate the browsing experience for themselves. Maybe seeking out non-biased, professional, journalism would be the best source for news alternative to Facebook?

Hot off the press!

You probably don’t spend too much time thinking about why you’re seeing what you’re seeing on Instagram. You should know though, that nothing about it is random. Instagram’s algorithms are created to deliver you the best content for none other than, well, you.

The platform recently released it’s feed ranking criteria in which it outlines a number of points that predict what you see and when you see it. These include but are not limited to: interest (what it feels that you’re into), frequency (how often you peruse), and recency (when the post was created).

For most people, an examination of these criteria could provide some insights into your regular Instagram experience.

It’s kind of nice that the platform’s highest criteria is interest. At least it worries about what we actually like, to some degree.

If you’re the type of person that likes to sit on the front porch in your rocking chair and wave your broom at the pesky kids that are making so much noise in your neighbourhood, this product may be for you.

Created by an open source Barcelona fabrication laboratory in which member gather to share ideas and create, the device monitors the decibel levels in the vicinity and tracks the data. Armed with this info, concerned citizens have some tangible clout when they approach city council to effect some change.

The device also detects other complaint-worthy items, such as air pollution, humidity and temperature.

So, the next time you need to plead your case to city council, do it with grace and aplomb, and most importantly, with digital evidence.